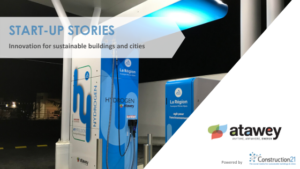 [This interview has been conducted by our media partner Construction 21, the collaborative platform dedicated to building and smart city professionals, as part of their “Startup Stories” series]

Atawey makes hydrogen a 100% decarbonated fuel with its autonomous station. This flexible and sustainable solution is adapted to any type of territory. Geoffroy Ville, the company’s sales manager, tells us more about this project that won the Sustainable Infrastructure Grand Prize of the 2018 Green Solutions Awards.

It’s an autonomous station that aims to develop hydrogen mobility at a lower cost. We are currently marketing models for fleets of one to five vehicles, often community owned. This will enable us to gather feedback and create models for fleets of over 50 vehicles. The aim is to create a real hydrogen network across regions.

What makes our station so innovative is that it’s autonomous. It therefore produces its own hydrogen with an integrated electrolyser that transforms water molecules (H2O) into dihydrogen (H2) and dioxygen (O2). This means that its only carbon impact is the electricity required for electrolysis. We try to use renewable energies wherever possible. Most of the projects currently underway are part of green projects in areas that use green electricity from the grid. After filling up for just 5 minutes, vehicles have a decarbonated fuel that enables them to travel approximately 650 km.

We mainly work with local authorities or independent energy companies such as Engie. We sold a total of 20 stations in France and one in Switzerland. The market is booming as more and more cities and regions seek to control their energy. An autonomous hydrogen station is not just a mobility solution, it’s also a buffer storage space to regulate intermittent energy production from renewable sources.

Needs are varied among communities. We have requests for powering utility vehicles, sedans, bicycles, etc. For example, we supplied Saint-Lô and Cherbourg with hydrogen recharging stations for hydrogen-powered bicycles used by tourists and associations. We have just set up a station in Chambéry to power hydrogen cars as part of a regional networking project for the area.

The next step is to pitch to developers. Our solution presents an alternative or complement to electric charging. 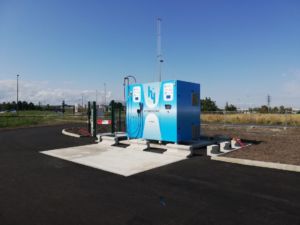 We developed a high-performance electrolyser that fits in a small space and requires only two connections: water and electricity. The water molecule is then broken and the oxygen is released into the atmosphere. The fuel is therefore completely decarbonised. The H2 is then compressed at 350 and 700 bars, which are the two market standards. End users can choose between two hoses according to what best suits their vehicle. The difference between the two standards is the storage capacity. The more we compress, the more hydrogen we can take on board.

We insist on decarbonated fuel production because, apart from our solution, stations are powered by lorry. It’s not natural to produce a fuel from fossil sources then transport and deliver it using lorries when it could be produced virtuously on site. 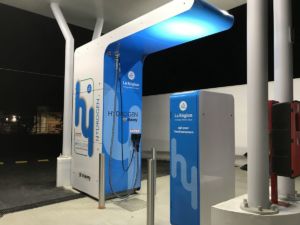 There are currently projects on a regional scale with hydrogen-based master plans. The region must be linked intricately enough for this fuel to develop. It represents an opportunity for communities to become energy independent and therefore more resilient in the event of an energy shock. Hydrogen also enables independent energy companies or citizen projects to store green energy. The possibilities are endless and we insist that a fuel with decarbonised production must remain so until it reaches the end user.