The Veghel-based company and EIT InnoEnergy supported ECOVAT, developer of an intelligent energy storage system that enables provision of heating to 500 to 3000 houses per buffer tank, has been admitted to the top list of companies that are part of the Mission Innovation organization.

We are talking about an assembly of about seventy companies that, in the short term, are capable of realizing a breakthrough in the area of renewable energy and reduction of carbon emissions, using their innovative power and technology.

According to Mission Innovation, with which 24 countries (including the Netherlands) and the European Union are associated, Ecovat seamlessly fits into the group of innovative companies on the IM list that are active in the field of the energy transition that is currently taking place.

Mission Innovation is of the opinion that Ecovat, which is quoted on the NPEX stock exchange in The Hague since spring 2019, meets the requirements for admission to the group of companies. Ecovat’s approach makes sure that houses that are traditionally heated with fossil fuel based energy, are provided with sustainable heating or cooling. The heat is stored in a buffer tank with a minimum depth and diameter of 30 metres.

In the report Mission Innovation puts forward a number of reasons for Ecovat’s admission.
– Innovation: the storage of heat in the Ecovat is highly efficient, as a result of which the temperature loss is less than 10%.
– Impact: Ecovat, by now, is a proven technology.
– Potential: according to calculations by research bureau Berenschot substantial savings can be achieved with the implementation of Ecovats.

Ecovat’s CEO, Aris de Groot, was pleasantly surprised by the admission to the IM list and considers it to be ‘an honour’ as well as recognition for the company’s mission. “It is marvellous that Ecovat is granted admission to this international platform, which enables us
to also expressly manifest ourselves outside the Netherlands as a partner in projects for the energy transition,” said De Groot. 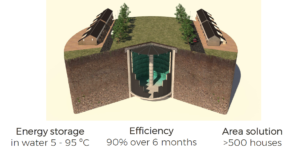