EIT InnoEnergy supported Elestor was voted by the general public as best innovation in the 2020 edition of the Dutch Chambre of Commerce competition. Elestor cheap energy storage solution, based on hydrogen-bromine flow batteries will help the energy transition forward.

In the transition to a 100% sustainable electricity supply, cheap electricity storage is the missing link. Elestor has developed and patented a solution for this: the hydrogen bromide flow battery. This allows electricity to be stored at an extremely low cost per kilowatt hour in stationary, large-scale applications, such as wind and solar parks. Elestor won the public prize award of the Chambre of Commerce Innovation Top 100 and received the plaque from innovator Ruud Koornstra.

The low storage costs (at about 5 cents per kilowatt hour, three to five times lower than with conventional technologies) are important because they determine the revenue model. Elestor achieves this, among other things, by choosing bromine as the active material. This chemical element is available worldwide in abundant quantities. Because it is extracted from seawater, no single party can dominate the supply, as is the case with lithium and cobalt.

The “flow battery” principle comes from NASA, which wanted to use this technology in the 1960s to provide energy on the moon. The chemical reactions for charging and discharging in this system are 100 percent reversible, so even after 10,000 times of charging and discharging, the system still contains exactly the same amount of hydrogen and bromine. Elestor has already won various awards for this innovation, including the Jan Terlouw Ambition Award and the European IDTechEx Award for ‘Best Development within Energy Storage 2017’. 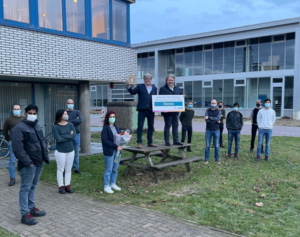