For Innovators>Business Creation>H2Gate: towards transhipment of 1 million tons of green hydrogen in the Amsterdam port

H2Gate: towards transhipment of 1 million tons of green hydrogen in the Amsterdam port 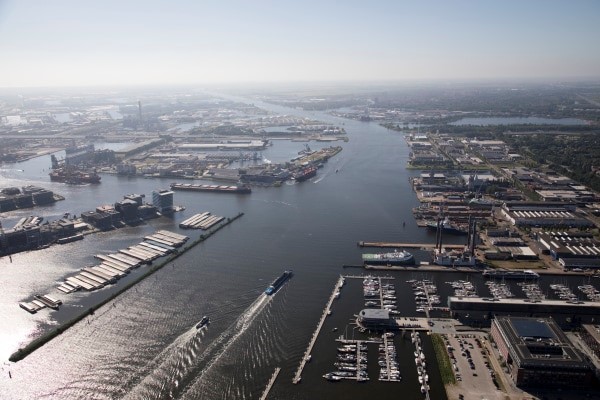 Port of Amsterdam and tank storage company Evos aim to import large volumes of green hydrogen into the Amsterdam port. Over the next six months, they, together with three specialised hydrogen companies, will investigate the feasibility of large scale imports, drawing up a blueprint and outlining a roadmap towards 2030 and beyond.

Port of Amsterdam, Evos, Electriq Global, Hydrogenious and Hysilabs have joined forces to investigate the technical and commercial feasibility of importing and storing hydrogen on an industrial scale. This initiative is dubbed H2Gate. The parties are jointly working on a blueprint for an import, storage, distribution and trading hub, consisting of facilities with a total throughput capacity of 1 million tonnes of hydrogen per year.

The five parties expect hydrogen to play a central role in the transition to a sustainable energy system. This transition is necessary if we are to meet the European target of becoming climate-neutral by 2050.

The Amsterdam port area is well positioned to play an important role in this transition. For decades, the port has been a leading international hub for the trade in energy products. There are many initiatives underway in the region to develop a green hydrogen cluster, including production facilities. The H2Gate partners share the vision that alongside local production of hydrogen, imports are needed to meet future demand in Europe.

Moving to overcome the challenges with transporting and storing compressed and cooled hydrogen, the H2Gate project is exploring several hydrogen carrier technologies in parallel, also to determine potential energetic and operational synergies between them. Subsequent studies into design and realization, including pilots, are conceivable.

As such the H2Gate project is an important step towards the realisation of an international supply chain for hydrogen on a commercial scale. Depending on the availability of green hydrogen worldwide and the growth of demand in Europe, such supply chains are expected to scale up towards the end of this decade.

Eduard de Visser, Head of Strategy and Innovation at Port of Amsterdam, shares this view, “As the Port of Amsterdam, we want to be at the forefront of the energy transition. Our established position as a formidable, international energy hub means we have the infrastructure, the partners and the knowledge and experience to be a catalyst for new, sustainable energy products. We are proud to work with Evos and other partners on H2Gate. It shows how innovative and enterprising the Amsterdam port is.”

Pierre-Emmanuel Casanova, CEO and co-founder of Hysilabs, one of the technology partners: “H2GATE is a great opportunity for Hysilabs. Besides proving all the advantages that our molecule HydroSil could bring in a port hub, we will collaborate to the deployment of hydrogen together with major players of the sector. We feel honoured to be part of such an ambitious project.”